ENGLAND RUGBY STARS AND THEIR CARS

The England rugby team have landed in Japan, ready to compete in the 2019 Rugby World Cup, but what cars have the team’s stars be left behind.

Car buying giant, webuyanycar.com have produced this round up of the best of the England Rugby team’s motors, along with some insight into the rules of the road when driving in this year’s World Cup host, Japan.

Leicester Tigers scrum-half, Ben Youngs, is one of the most experienced England players in the World Cup squad, with an impressive 86 England caps under his belt. When not on the pitch, Youngs can be found enjoying the great outdoors in his adventurous, Twisted modified, Land Rover Defender.

Youngs’ isn’t the only player to own a motor from luxury manufacture, Land Rover, with England team mates, Jamie George, Joe Marler and George Ford all favouring the opulent, Range Rover.

The Porsche Cayman is also a popular choice amongst the England team with Exeter Chiefs team mates, Luke Cowan-Dickie and Henry Slade, both owning this sporty model. Jack Nowell is another Exeter Chiefs player that enjoys a sporty ride, driving a dark grey Jaguar F Type.

Richard Evans, head of technical services at webuyanycar.com, said: ‘’We buy a number of luxury and performance cars at webuyanycar.com every week, including Land Rovers, Porsches, Maseratis and Jaguars. It’s clear to see that the current England squad have great taste in cars.

‘’We’ll be rooting for the England lads during the World Cup, we hope that their performance will be as good as that of their cars.’’

Richard added: ‘’For those looking for a quick, hassle free way to part with their car, so that they can get back to watching the Rugby World Cup, why not give webuyanycar.com a go.’’

Anthony Watson, who will be entering the 2019 World Cup with 34 England caps, has one of the most exotic cars of all the England players. The Bath Rugby full-back is the proud owner of a Maserati Ghibli, with a stylish jet black paint job.

If you’re planning on heading to Japan to enjoy this year’s world cup, there are a few things you should know about the country’s driving laws.

Like the majority of the world, the legal driving age in Japan is 18. The Japanese have a zero-tolerance attitude to drink driving and those found guilty of drink driving may be subject to harsh punishments, including up to three years imprisonment or a fine of up to 500 thousand Yen (£3,853*). Using your phone whilst driving is also strictly prohibited.

Motorists that find themselves at a rail crossing are permitted to come to full stop before crossing and driving through a puddle that splashes a pedestrian is a finable offense.

One thing that Brits driving in Japan don’t need to worry about is adapting to driving on the other side of the road, as just like us, the Japanese also drive on the left-hand side.

*Currency conversion from JPY to GBP was conducted on 29 August 2019. 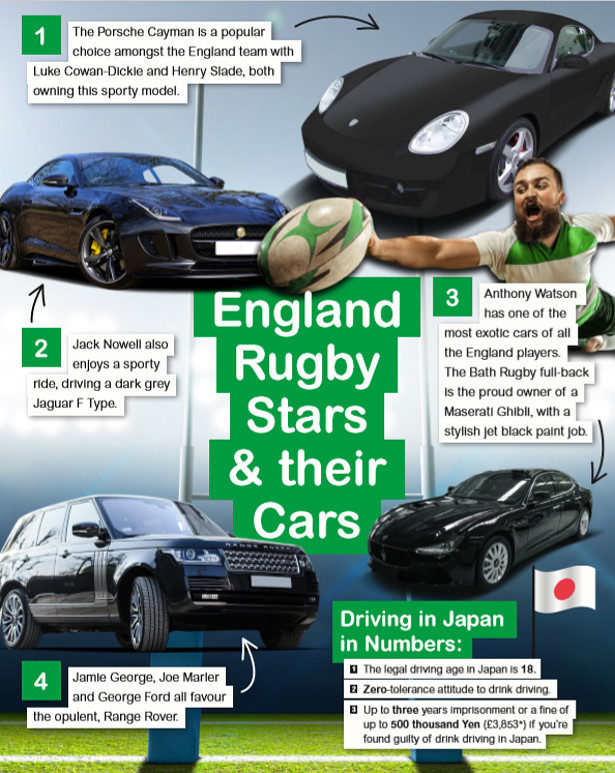